In between the Tsunam Rose designs, I have been carrying on with orders and wanted to share this one with you as I am rather chuffed with it. I had been asked to create a special keepsake card for a Golden Wedding anniversary and had already made my first concertina card for my younger sister's 30th with pictures of us and some quotes about sisters and family.

Using papers from Pink Petticoat, an embossing folder, my trusty Boxer and some Marianne dies, I created a card with 12 faces, then added some photographs of the couple and some quotes about marriage. And here is the result: 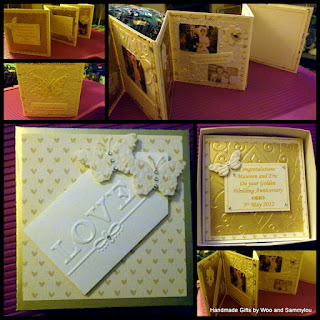 Unfortunately, the pictures aren't great (it was late and I didn't have time to re-take before the card was collected) but I am very pleased with it, and so were the happy couple!

Sammylou
Well, my foray into the world of blogging begins! I am Sammylou, a HR Team Leader by day but avid crafter by night. I love to create things from paper and card, and this blog will be my chance to share with you what I do. I have a serious paper fetish and am always looking for ways to better my techniques and increase my crafting knowledge. I live with my husband, two children and two cats in Coventry.